This book surprised me turn after turn. Epic twists. I loved the characters, the pacing, the world building, the subplots. The hints and foreshadowing revealed through various scythe’s private journals were excellent.

A fantastic read. It’s over 400+ pages, yet I breezed through it in two days. I’m a slow reader, but I was so engrossed that I couldn’t put it down. I’m already nearly done with the sequel Thunderhead, which I will also write a review for. This series is absolutely fantastic so far.

I read that Universal will likely be making at least this first book into a movie, which is incredibly exciting.

My review becomes more in depth below, but that part of the review contains SPOILERS! Scroll down past the description if you want to see it. 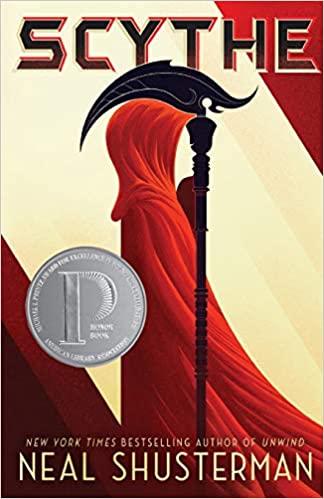 Buy this book on amazon

A world with no hunger, no disease, no war, no misery: Humanity has conquered all those things and has even conquered death. Now Scythes are the only ones who can end life – and they are commanded to do so in order to keep the size of the population under control.

Citra and Rowan are chosen to apprentice to a scythe – a role that neither wants. These teens must master the “art” of taking life, knowing that the consequence of failure could mean losing their own.

Scythe is the first novel of a thrilling new series by National Book Award-winning author Neal Shusterman in which Citra and Rowan learn that a perfect world comes only with a heavy price.

CAUTION TONS OF SPOILERS BELOW

—— Most Emotional Moment ——-
Citra’s final test to become a Scythe. I was a wreck. That scene was heart wrenching.

—— L’amour ———
Of course, I was really hoping for Rowan and Citra to find a way to be together at the end of the book – heck, I also hope that Curie and Faraday can share their lives together in his retirement getaway… those things aren’t resolved but I’m hoping love will find a way during the series.

——– What Surprised Me ——-
I was SHOCKED…. and I mean TOTALLY SHOCKED… by Rowan’s actions in the Tonist compound. With so much of the book left after that point and before the conclusion, I thought for certain that Goddard’s crew was going to get un-deadish and exact revenge. While I knew Faraday was still alive early on, Rowan’s transformation and ultimate fate is something I didn’t see coming. This book was thrilling to the very end.